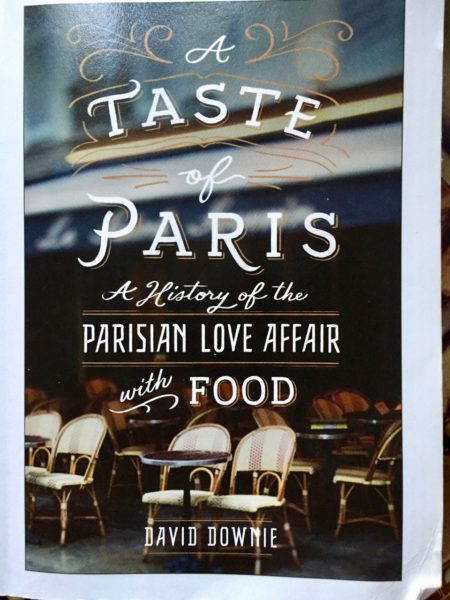 “A Taste of Paris, A History of the Parisian Love Affair with Food” is a fun book in David Downie‘s style. In his latest book, David combines history, travelogue and a personal quest. David’s quest this time: “What is it about the history of Paris that has made it a food lover’s paradise?” In “Taste” you can follow his Paris food seduction from 53 BC to the present.

Bringing Paris food history alive, David takes us back to the barbarian Parisiis squatting and eating with no tableware and demonstrates how the Romans were the more elegant diners and knew how to entertain and cook refined meals. He presents lots of written culinary activity between the 1300s and 1792 (end of the Ancien Régime) with all the King Louis’s, their chefs and the chefs’ cookbooks.

In “Taste” food origin myths are dispelled. What food do Egyptians, Mediterranean Jews and Greeks have in common? Foie-gras. Sorry, the delicacy does not have French origins. Many French recipes originated in Italy. French food culture is multi-ethnic even today.

Paris Food History in Multi-courses
”Taste” is a history book with David’s humour and presents a timeline of who was cooking up what and when. I would like to imagine what life would be like if school history books had a food timeline relationship. If you thought “nouvelle cuisine” began in the 1970s, think again. Some where else along this timeline of Paris food history, which clearly began when the Romans were bathing at Cluny, you will find the answer.

Throughout “Taste” David often references cookbooks through the centuries, their recipes and what you will find in them. For example, the ingredients of the real blanquette de veau in François Marin’s recipe from 1739; the original healthful crème brûlée au citron vert from 1691 or the sauce recipes of Taillevent, chef of kings Charles V and VI. His sauces from the 1300s vary in colorful shades of “whitish greenish and reddish”: ginger-cinnamon cameline; gingery dodine de layt; piquant verjus-based sauce.

A Food Tour of Paris
If you are a Paris restaurant and cuisine curious individual, have a pen and paper or Google Maps and a phone app open for note taking while reading “A Taste of Paris”.

David references many restaurants noted for their food style and decor. I want to check out Anne-Sophie Pic’s restaurant with the “table d’hôte” in the centre of the room. The style dates back 250 years before restaurants were known as restorative places to eat with fixed menus.

He suggests where to go from bistro dining to elegant bewigged wait staff at Versailles. The food history of ruling monarchs and emperors and the debauchery of the Regency and Palais Royal enliven the historical story telling.

He researched and read the cookbooks, recipes, almanacs, encyclopedia and the how-to-books of “proto-food theorists”, Jean Anthem Brillat-Savarin and Alexandre Balthazar Laurent Grimod de la Reynière (Billat-Savarin and Grimod de la Reynière for short). David was a reviewer for Gault &Millau and has had a full career of food and travel writing (when you could earn a living prior to the internet rage).

Other David Downie book reviews on Colleen’s Paris
Paris, paris: Journey into the City of Light
Paris to the Pyrenées, A Skeptic Pilgrim Walks the Way of Saint James
David Downie in Wikipedia
David Downie on National Public Radio (NPR)

Dining Out in Paris – Book Review