Caro/Jeunet is a Paris/Montmartre exhibit (until July 31) for cinema lovers of the out of the ordinary. Some recognizable film examples are Amélie Poulain, Delicatessen, Alien Resurrection, The Young and Prodigious T.S. Spivet, The City of Lost Children. Their film music, special effects, costumes, props are always out of the ordinary. Marc Caro is a graphic arts novelist and illustrator. Jean-Pierre Jeunet is a director. After the “Alien” success, Jeunet left Hollywood. He wanted to go back to his neighborhood and make a little film with some friends in Montmartre. Voilà! The little film became the global success, “The Fabulous Destiny of Amélie Poulain”. I can recommend the exhibit and the tea salon for a very tasty lunch.

What you will see

Some of the items on display at the Halle Saint Pierre exhibition are marionnettes, paintings, illustrations, machines, period costumes, a giant Alien, Amélie’s photomaton notebook with the photo collection, TS Spivets childhood memory book, storyboards, scene illustrations, Marc Caro’s illustrations, the dwarf, a miniature boat. a brain, Audrey Tautou’s dresses in A Very Long Engagement, and so much more.
One small corner room in the shape of an elongated triangle holds the works that will never been seen on the big or the small screen. 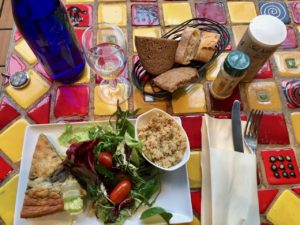 Your ticket is valid for the second exhibition upstairs “Turbulence dans les Balkans“.