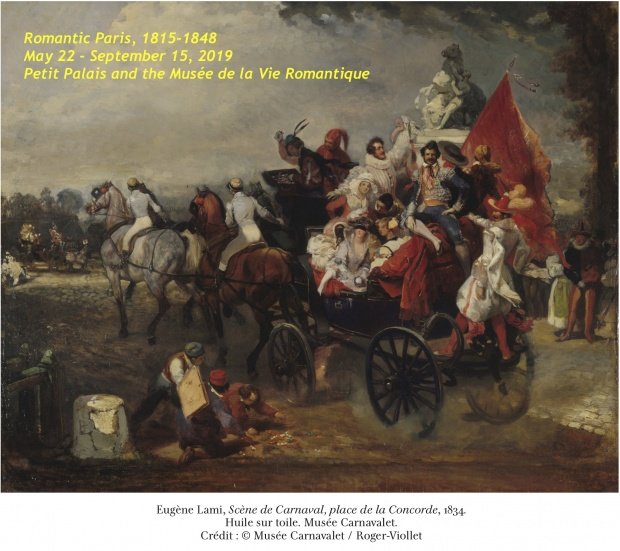 Was there a single event that led to Romanticism? Where did it begin? You could say the era Enlightenment and war brought on Romanticism. It started in Germany. The Petit Palais’s latest exhibition, Paris Romantique (1815-1848) until September 15, is one of a two-part exhibition. The second part takes place at the Musée de la Vie Romantique. Initially, I went to the exhibition out of curiosity; drawn to this period of emotional art. I found Romantic stylings of the Gothic, Middle Ages and Renaissance, decor, furnishings, the influence of women as artists, writers, composers, sculptors. If found elements of the medieval and the erotic, theatre and fashion. I left Googling the whole story, its influences, philosophical connections and realised that between wars, there is always a period of experimentation (think 1920s and 1930s).

Throughout continental Europe after the Napoleonic wars, was it a coincidence that the arts, literature and clothing, suddenly took on a more peaceful lifestyle? Was this Romantic period the cultural equivalent of war and conquests? Or was this a cultural phenomena, a lull between the violence of war and revolution, an interpretation of the Enlightenment of the 1700; a return to nature? Or knowledge that would cause restlessness among the masses and lead to revolution?

Women are given some space at the exhibition as authors, artists and sculptors instead of the traditional

Sculpture Jeanne d’Arc crying at the sight of an injured Englishman; sculpted by Princess Marie d’Orléans 1834

Marie de Flavigny, comtesse d’Agoult (aka Daniel Stern), Henri Lehmann, 1843, Used the pen name of Daniel Stern, including autobiograhical novel, Nélida, published in 1846. Passionate love affair with Franz Liszt, for whom she braved all social conventions, left her husband, followed Liszt to Switzerland and then Italy. They had three children together and separated in 1844.

homemakers, entertainers or prostitutes. In the display case of books, two books are written by Frances Trollope, “Paris et Les Parisiens” and Lady Morgan (née Sydney Owensonj) “La France“. Although the books were very successful, the French readers were unhappy with the judgments made by both authors.

Marie d’Orléans was an accomplished artist and sculptor and studied under Ary Scheffer. Marie, a daughter of Louis-Philippe, King of the French (1830-1848), lived in the Tuileries palace. In a Prosper Lafaye painting, her plaster model, “Jeanne d’Arc crying at the sight of a wounded English enemy”, is on display. The painting also shows her trendy, newly remodelled salon at the Tuileries. During this Romantic period newly remodelled meant in Medieval and Renaissance styles.

Image of comb and jewellery in Room 2 for fashion

Room 2, The Palais-Royal, Bonnets and “gigot” sleeve dresses, and Dandies, Paris the commerce and fashion capital

On display in one hall are multiple cases with ladies jewellery, hair ornaments, fabric, scarves, decorative arts, clocks, glass and porcelain and clothes. Traditionally, women renewed their wardrobe every seven years. Not to be left out are examples of the Dandy, the men known for being open-minded, carefree, “fashionistas” and dapper with a cane. The Dandy wore clothes that accentuated the waist and shoulders. Their silhouette was defined with corsets and padded calves.

Not as extreme as the Incredibles (Incroyables), Romantic-period clothing featured enough eccentric elements to lend itself to satire

Timely for its current debate on renovations for Notre-Dame de Paris, the exhibition opened about a month after the Notre-Dame de Paris fire. Room 4 “Notre-Dame de Paris” speaks to the visitor of the monument’s condition pre-Eugène Viollet-le-Duc renovation. The room’s theme references the “colorful depictions and dramatic love story” found in Victor Hugo’s 1831 book Hunchback of Notre-Dame. He began writing the book in 1829. Its Medieval setting fit in with the Romantic period. It was also a demonstration of using literature for subtle references to the run-down conditions of Notre-Dame in 1829 and why Gothic architecture should be valued.

Guide to the Exhibition in English describes the eight rooms/themes, the Epilogue of 1848 and the set design of the exhibition.

Clock pendulum of Notre-Dame, 1835-1845, encrusted wood with brass and chiseled bronze and gold

My Advice for the Visit

For interesting details, definitely rent the audioguide (five Euros) available in English when you buy your ticket. The main explanations printed on the walls are in English and French. Some of the display items also have labels translated into English. The exhibition pamphlets and books related to the exhibition are in French.
Arrive during lunch on a Sunday between noon and 2 pm and avoid a crowd. By 3 pm the rooms fill up.
The visit can take up to three hours depending on your speed and note taking.

After “Paris 1900: La Ville Spectacle” the Petit Palais is presenting Romantic Paris, a further episode in its overview of the great periods that have shaped the city’s identity. This is both an exhibition and a cultural event: a sweeping panorama of the French capital during the Romantic years from the fall of Napoleon in 1815 to the revolution of 1848. Over 600 works– paintings, sculptures, costumes, objets d’art, furniture – plunge the visitor into the artistic, cultural and political ferment of the time. The exhibition’s immersive design takes the form of a tour of the period’s emblematic Paris sites: the Tuileries, the Palais-Royal, the Nouvelle Athènes quarter, Victor Hugo’s Notre-Dame, and the Grand Boulevards and their theatres. At the same time an additional segment at the Musée de la Vie Romantique rounds off the exhibition with a look at the city’s literary and high-society salons.

Guide to the Exhibition in English
Images from the Paris Romantique exhibition
Press release from Petit Palais in English
Uprisings in 1848 against the monarchies of Europe
Romanticism across Borders
Romanticism Art Movement
Overview of the exhibit rooms for Paris Romantique
Notre Europe, quelle historie! (6/10) ” (“Oh, Europe! (6/10) In the Shadow of the Sun King”) If it is available in your country, this is an ARTE television program. Click on language upper right for English subtitles.

L’Hôtel de Cluny, Thomas Shotter Boys, Musée Carnavalet Built at the end of the fifteenth century as a Parisian town house for the abbots of Cluny.

In the room explaining the 1830 revolution is the reduced plaster model of the genie de la liberté, by Augustin Demont. The original measures 4 meters high and erected in 1845.

Father Christmas at the Bastille in Paris

Day Trip to Giverny via Vernon