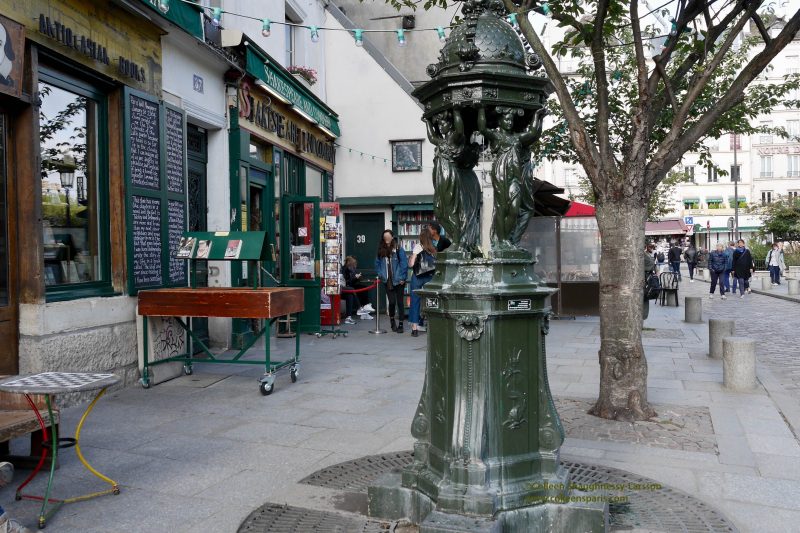 Have you walked around Paris and passed right by a water fountain from 1872 without taking a drink? Did you spend two Euros on a bottle of water instead? The non-profit Society of the Wallace Fountains is working hard to preserve the iconic Wallace fountains. The Paris water department (Eau de Paris) is responsible for their continued functioning. The water source differs throughout Paris. Where I live in the Bastille, ours comes from an aquifer.

The fascinating story and a guidebook with maps and 21 self-guided walks is a great way for to hunt for the fountains. As Barbara Lambesis the author and President of the foundation says, “Find the Wallace Fountains, Find Paris!”. On the website you can download a chart to find the 103 fountains or download each of the 21 walks for a self-guided tour. You can support the foundation when you use the available maps by making a donation of any amount. The book is available at Shakespeare and Company and is small and handy to carry along.

Watch the video as Barbara tells the story.

Sir Richard Wallace funded the dark green fountains to blend with the Parisian cityscape. He drew rough sketches, but turned the design over to a Nantes sculpture, Charles-Auguste Lebourg for the final design. The funding and installation was timely and crucial. The Prussian siege of Paris and the ensuing Commune meant lack of clean drinking water to the besieged areas of Paris. The wine flowed; but the water did not. Pick up the book, you will love it for its history, insights and finding Paris you might otherwise not visit! Enjoy!

Child’s Paradise in the Parisian Woods