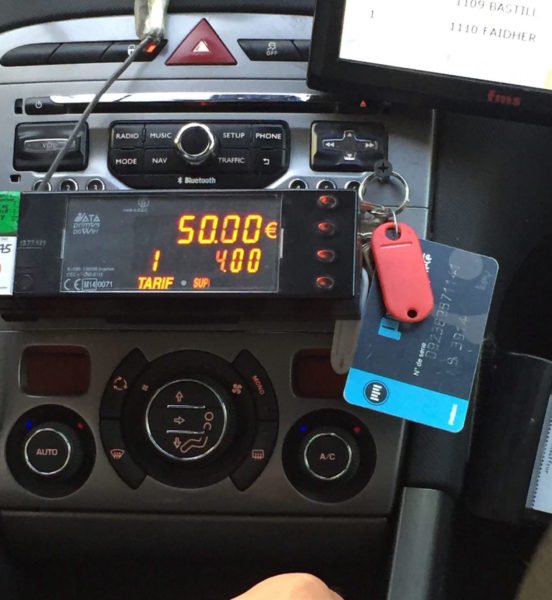 Strikes getting the best of you? Book a taxi on the G7 Book a Taxi page in advance to get to the airports. Usually you can either step outside and into a taxi or book the same day. With the strikes, you want to reserve a taxi, with G7 whether going to the airport or into Paris. Taxi stands are outside the airport and do not usually have to be booked in advance. Rates vary between Rossy-Charles de Gaulle (CDG) and Orly (ORY).

After an expensive experience pre-fixed rates, I had a rude surprise. Being stuck in traffic to the airport Roissy-Charles de Gaulle one day, an anxious feeling came over me. The taxi meter kept counting, the fare kept mounting. I could not solve this mystery because I had no clues! It was now showing thirty euros over what I expected to pay. As we pulled up to the terminal, eighty euros was the final total plus my suitcase. Those days of the mystery taxi fare to or from an airport ended March 1, 2016. I was very happy to see the fixed rate!

The set rate to and from my apartment on the right bank is now fifty euros. A supplement is charged if you order a taxi the day of departure (four euros); any day prior (seven euros) and pick up on the street (zero euro). From the left bank, the flat rate is fifty-five euros. Additional fare information for Orly and explanations can be found on the G7 website for Paris Taxi Fares.

Add four (4) Euros if taxi is booked on the same day. Add seven (7) Euros when booked in advance. During a strike period, book in advance within a week of knowing about the strike.

With the plethora of private taxis, the Parisian taxi monopoly has awakened to the dawn of competition.

Book a taxi on the G7 Book a Taxi page

The official site for French law (Site officiel de l’administration française) includes the new rates between Roissy-Charles-de-Gaulle and Orly, supplemental charges and distance rates within Paris. These figures may change each year when taxi rates are adjusted in each of France’s departments (Ile-de-France is department number 75).

How to find a taxi stories
Airport-related stories

May 1 and the Muguet – Lily of the Valley

BHV and Other July Changes in Paris