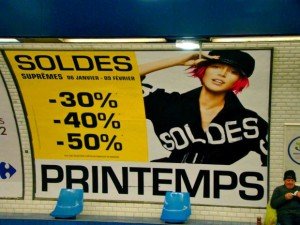 Use Google Translate for Paris activities and information on the following web sites:
For a complete list of exhibitions visit the newspaper leParisien.fr-Paris étudiant.com web site
l’Officiel des spectacles or buy the magazine for 35 cents when you arrive in Paris.

Summer Sale begins end of June in Paris
Between end of June and beginning of August. look for the deals – and get there early. Within two weeks everything has been picked through. The good news is that summer vacation begins two days after the sales begin so perhaps the natives will leave and the tourists can buy everything! Doors open at 8 a.m. 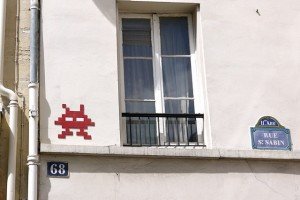 For twenty years the Villette area, in the nineteenth arrondissement, has welcomed films in their original language (VO-version original). Bring your snacks and bring your chair or for 7 euros you can rent a deck chair and blanket.

Free exhibits at the Hôtel de Ville
Two years in the making, the photographs of Gérard Uféras show all the stages building up to 70 different marriages, civil, religious and common law and their receptions. Some of the photos include the sounds of the festivities. One of the halls is reserved for a 26 minute film.

Free
Concerts at the beach – part of Paris Plages
5 p.m. to 10 p.m.  the Festival FNAC Indétendances (list of concerts on infoconcert.com)
The plaza (parvis) in front of the Hôtel de Ville
Free concerts every Friday and Saturday during Paris Plages.

Paris Beach fans
Since 2002, the beach has been artificial, a successful attempt to capture a bit of the spirit of days gone by. Paris had real beaches until the early 1960s.

The program for the eclectic music festival and other events if you are staying in this area of Paris (Use Google Translate)
Tuesday: jazz
Wednesday: Globe trotters
Thursday: rock
Friday: new performers
Saturday: boogie

Other city of Paris museums

Le Château at the Parc Bagatelle
The château is open every Sunday and holiday at 3 p.m.

This château was built for the younger brother of Louis XVI and is considered a jewel for its decorative arts. It was built as part of a bet made in 1777 between Marie-Antoinette and the count d’Artois (future Charles X).

The refined and comfortable residence is situated in the middle of a park. The interior decorations are the work of the greatest artists of the period.

Parc de Bagatelle
Entrance to the park is at the Sèvres gate
Bus 43, stop Place de Bagatelle and a ten minute walk

Fire works will be shot off near the Trocadéro  at 11 p.m. on July 14. The color theme is red, white and blue. The best viewing spot according to the Mayor’s office is on the Eiffel Tower side (Champs de Mars).

Fireman’s Ball (La brigade de sapeurs-pompiers de Paris)
The balls will take place on the 13th and 14th of July from 9 p.m. until 4 a.m.
Some of the balls may charge admission

Bastille – Grand Bal à la Bastille
Mid-July, two stages will be placed around the Colonne de Juillet (the column in the center of the Bastille)
The two themes are: Guinguette Rock and Balls of the world

In cooperation with sustainable development (développement durable) all of the electricity for the activities will come from renewable sources of energy.

The program for the eclectic music festival (Use Google Translate)

For the kids
The Jardin d’Acclimatation (the site is only available in French, but the photos speak a universal language) is celebrating its 150 year birthday.

Les Pestacles (the French pronunciation of “spectacles” – accent on the ‘tac’- by children often sounds like pestacles.
The pestacles take place every Wednesday for the whole family, Parisians, French visitors and tourists.
Parc Floral  (available in English “EN”) (when you are not visiting the Château de Vincennes! )
Continuing to September 22, 2010
Tariffs:  free under 7; 2.50 euros (7-26); Adult: 5 euros (all day)
Schedule
Where: Esplanade Saint Louis in front of the Château de Vincennes
What: Seventeen concerts, readings, street artists and performers, circus and clowns, routes of discovery in the park and since this is the year of Chopin, an exhibition about romantic style music. The concerts are suitable for everyone from two years to multiple years of age.