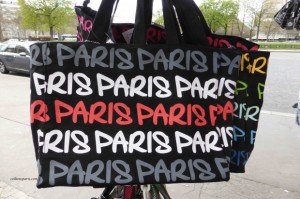 Museum Exhibits That I Have Seen or Will See

“In this new exhibition, the museum has invited the Italian designers from the Magia2000 studios to suggest some possible answers. Barbie also inspires One-Of-A-Kind (OOAK) creations by contemporary designers, such as Magia2000. This studio is renowned in the doll community for the exquisite miniature garments they create; hand embroidered, cut to the highest Haute Couture standards and highly appreciated by discerning collectors. Specially created dolls will be unveiled as part of this exhibition. A large selection of vintage authentic dolls from two prestigious French private collections will also be on display in the 24 showcases that comprise this special exhibition.”—Musée de la poupée

What happens at night, in the sky and in nature? The exhibit is the study of biology, astronomie, animal behavior (ethology), study of living systems (physiology), anthropology and neurology provoking the imagination of fears of the night.

I was fascinated by the exhibit because it concentrated on two things: the development from an early age of the photorealist, Alex Ross, and it provided a basic chronology of comic books. The genre is too broad to include in only one exhibit. It does follow the various ages that the comic book has survived through. I say survive because of the changes wrought by the Comics Code Authority influenced by the 1954 publication of “Seduction of the Innocent”. If you are in the area of Trocadéro and a comic book fan, the exhibit is worth the stop.

“This exhibition presents, for the first time in France, a vast selection of original paintings, drawings, and sculptures from the personal collection of the artist, highlighting the extraordinary diversity of his projects from his earliest work with Marvel to his most recent creations.”

Exhibition opening hours
Wednesday through Sunday from 11 am to 6 pm
Closed on holidays: April 20, May 1, 8 and 29, June 8.
Exceptionally closed on June 5th

Other Super-héros ideas in Paris

l’Art des super-héros Marvel
Until August 31, 2014
l’Art Ludique (Website available in English)
is hosting a major exhibition devoted to the art of the Marvel Super Heroes.

Read about the details of the Marvel exhibition at Art Ludique. 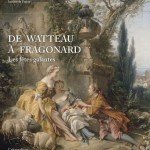 “Fête galante” is a poetical term. The term describes a genre of paintings and drawings that are more fantasy than reality due to the subject matter. The art blossomed in the early eighteenth century during the Regency period (1715-1723). These were idealized scenes of what could be happening out in the fields. They were provocative showing bathing scenes and frivolous pleasures of courting and dancing. Intimate scenes are invented in the artist’s imagination. Antoine Watteau (1684-1721) was the most influential French painter of the genre in the early eighteenth century.

Get the Jacquemart-André application for your phone or tablet for free.

Free activity book available in English for children age 7-12 for each exhibition at Musée Jacquemart-André and other Culturespace sites. 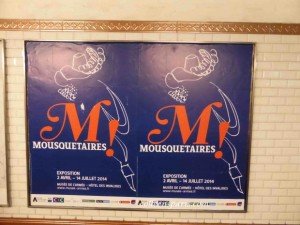 Poster for the exhibit, M! Mousquetaires (Musketeers)
Musée de l’Armée Invalides, Until July 14, 2014
This exhibition is dedicated to the “real” musketeers, to these young men who witnessed the splendor of the Court and the extreme violence of the wars of the seventeenth century.
For kids

The English Musketeers game booklet  to accompany the exhibit.
The Two Mouseketeers (1952) A Tom and Jerry cartoon (7 minutes) Sunday, May 25, 3 p.m. to 5:30 p.m.
Free Musketeer Exhibition Booklet in English!!

More details about the exhibition

The museum is open every day of the week, from Monday to Sunday from 10 am to 6 pm.
The museum is closed on May 1, 2014.
The ticket desks close 30 minutes before the closing of the museum.
The temporary exhibition will be opened till 9 pm on Tuesdays (excepted on May 6, 13 and 20 ; June 17, 2014)
A combined ticket will also give you the opportunity to visit the Dome Church, the Tomb of Napoleon, of Turenne and Vauban. 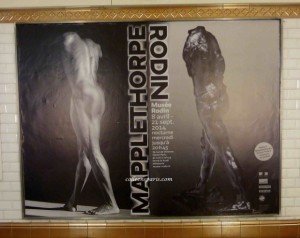