Jazz on the radio:
TSF Jazz (Jazz all the time) or FIP (jazz and world music). FIP is part of France Radio. Both can be streamed. If you can’t be in Paris at least you can listen to the music and the language.

Jazz in Clubs and concerts
Check out the Paris nightlife Que Faire à Paris (What to do in Paris) for current jazz festivals and other music events. Otherwise, search the keywords paris nightlife for a listing of websites advice. Visit l’Officiel des spectacles for a complete listing of concerts: classic, gospel, jazz and blues, world music, slam, contemporary, rock and pop, rap, soul, funk electronic.

Jazz in Restaurants
In the Bastille. L’Atelier Charonne is a restaurant that offers music and dinner — a 20 euros dinner/music menu. L’Atelier is part of the jazz concert clubs.

For menu details at l’Atelier Charonne, click on “Le Bar” and the tab “Diner+Concert”.

Their little tip (“Petite astute“): The menu diner+concert guarantees you a good table in front of the stage and without any increase in drink prices. Scroll the page (scroll bar next to the musician image) to read the menu. The “Programmation” tab provides their calendar of musical performances.

Reader’s Question – Teenagers in a Jazz Club:
We will travel to Paris soon, with three teens. We want to visit Cafe’ Universel, 267 rue Saint Jacques, in the 5th, since they have jazz. Have you been here? Whad u think?

Are the teens allowed with their parents?

Is there a minimum age, like here in Los Angeles, for young people to enter a club?
Thank you, CK.

Response:
I called and there is no minimum age to enter and listen to the music.

When you come to Paris pick up a magazine called l’officiel des spectacles. It costs 35 euro cents and will list numerous jazz clubs.

If you would like free admission, look for the words “Ent. libre”. 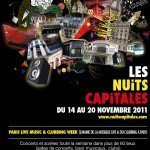 The following information is an excerpt from the Paris Tourist Office newsletter  n°63.

Les Nuits Capitales: live music and clubbing week in Paris
For the second consecutive year, the event Les Nuits Capitales promises to keep Paris wide awake for a whole week of events, concerts and special evenings. Day and night, more than 60 venues will welcome the public for this major event: concert halls, music bars and clubs, as well as rehearsal studios and music schools.

Many special events will invite people to rediscover Paris’s nightlife scene: tourist visits to lively areas, musical cruises, events at the start of the evening in municipal museums. The two highlights of this exceptional initiative will be the opening evening at the Centquatre on Monday, November 14 and the event Nuits Capitales Circus at the Académie Fratellini on Sunday, November 20. Passes downloadable online will enable everyone to be identified at the entrance to all the venues and benefit from advantages and reductions.

“… Les Nuits Capitales promises to keep Paris wide awake for a whole week. As a foretaste of this festive event, singer-songwriter Mathieu Boogaerts spoke to the Paris Tourist Office.

What parts of Paris would you like to show them?
M. B.: The parts of Paris that I would like to show to tourists are those which are not in the tourist guides. Books do that better than me so there would be no real point in doing it. But, what I would like to show them is the cosmopolitan side of Paris: the Japanese district in rue Sainte Anne, the Indian district at La Chapelle, the Thibault Montamat Congolese district at Château d’Eau, the Senegalese district at Château Rouge, the Chinese district at Belleville; in short convivial Paris, ‘real people’ and the world village atmosphere that reigns in these districts. Because that, too, is Paris. And tourists aren’t necessarily aware of it. Saint-Germain-des-Prés is not the only place they should go to. There is something for all tastes!

My first negative feeling is that a night out is very expensive. I never go to a club because the entrance fee is not affordable. And once you are through the door a drink costs at least 10 euros. There is no pleasure for me in drinking a cocktail at that price because there is too much discrepancy between customer and producer. There are so many impersonal places that all look alike, and where the service is very bad. It is often difficult to get into these sorts of places: you need to know people in the right places to really enjoy them to the full.

But there are other places in Paris; La Java, for example, I love this place. It is somewhere that has remained true to itself, which has a personality, a look. The entrance fee is reasonable. Although I do not necessarily like every group that performs here, I like its approach. I also like L’International which is a concert bar with free entrance where two or three groups play each evening. I appreciate the atmosphere of the place: a good friendly and generous spirit prevails. That is rare! ….” – Excerpts from the Paris Tourist Office interview with Mathieu Boogaerts.