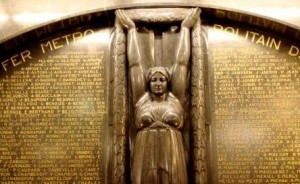 Around Paris sculptured women in tunics are in doorways, decorate façades or commemorate the dead.

Carlo Sarrabezolles (1888-1971) sculpted the Monument aux morts (Monument to the dead) in 1931 in memory of the Paris metro agents who died for France during the First World War. The bronze sculpture itself was made between 1921 and 1922. You can find it downstairs in the Richelieu-Drouot metro station at rue Drouot and Boulevard Haussmann.

The information includes the line number, name of the station and dates.

The monument is decorated with a cariatide in black marble. It represents a woman carrying a heavy burden; death perhaps? The demi-circle is inscribed with the names of the metro employees who gave their lives during the war. On the bottom is listed the battlegrounds during the war between 1914 and 1918.

The word “Liberation” became part of this sculpture after the Second World War to commemorate the participation of deceased agents who were members of the Resistance network.

An exhibition of Sarrabezolles’ work was held in Reims. The « De l’esquisse au colossal » exhibition is at the Musée des Beaux-arts de Reims, 8, rue Chanzy, Reims, France between October 2008 and January 2009. He is considered to be among the great sculptures of his time.

Architectural definition
A cariatide is a statue representing a woman supporting a columnar system on her head; she replaces the classical column.

Figures clothed in long tunics disguise the column. The name “cariatide” comes from the inhabitants of Caryes (city of Laconie) in Greece that was allied with Persia and during an invasion the inhabitants were exterminated by other Greeks and their wives were sent into slavery and condemned to carry heavy burdens. (translated from techno-science.net)