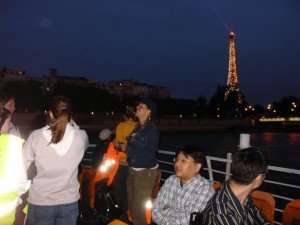 Take a Paris boat tour on a bike?!

When you visit Paris, there never seems to be enough time; time to either squeeze in all of the sightseeing or for stepping back in time (not the guillotine part, of course).

In a four to five hour period, you squeeze in sightseeing of the left and left banks of the Seine, watch the lights of Paris come up, eat home made ice cream looking at Notre-Dame on the Pont Saint-Louis as the sun sets, take advantage of the photo ops at the Louvre and the Champs Elysées, ride a boat along the Seine (and be the only group allowed to bring their own “beverages” or have it provided); Phewww! That’s economizing your time!

The bike tour was an adventure on two wheels along the streets of Paris. You have to be quick and pay attention.

The “boule” players saw us coming and one of the men in a red short-sleeve shirt took measures to guard the metal balls and the playing field, stretching out his arms as we rode past to the far end of the Champ de Mars. He had obviously seen this tour in action before.

We were clad in day-glow vests for the adventure of riding in the bike/taxi/bus lanes. 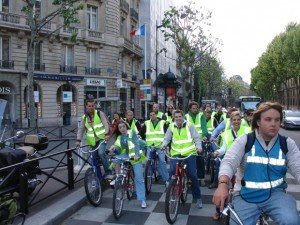 The taxis weaved in and out of their lanes to avoid us; the buses only hoped they would not end up behind us! We didn’t exactly stay in a tight pack.

Our guide, Stacy, turned her head constantly to ensure that the group was together. She did a great job checking that the rear guard of “Vanessa and Nate” was doing their volunteer job properly.

What to expect
The tour offers an occasion to see the sights at a different speed (slow and relaxing) rather than walking or the speed of a bus.

The declining day light is more noticeable on a bike as the sky, streets, buildings and trees turn new shades of color.

The Eiffel Tower and the lights of a May Paris illuminate as the boat ride along the Seine begins at 10 p.m.

The first opportunity to really have a bite to eat is on the boat ride.

A couple of the guys bought crêpes to-go around the corner from Berthillon http://www.berthillon-glacier.fr/ during our ice cream break.  (Berthillon is famous for their fresh made-daily ice cream and sorbet).

I would advise either eating a good meal before you go or bring a sandwich for later. We brought can duck (rillettes du canard) and baguette. It was a balancing act trying to spread the duck on baguette pieces and hold a cup of wine…there were no tables…. Make your picnic simple if you plan to eat that late.

Who goes
For the students, the tour is an opportunity to exchange ideas (not academic by any means!) between semester breaks, do the “awesome” European vacation, begin summer work or take the graduation break before the serious job entry.

Since four of us had probably graduated from college in the 80s or before, those other 21 participants took us back to college days of rowdiness and whooping it up!

The nationality and age make up of the crowd varies; our group of 26 consisted of Australians, Canadians, Americans and a Swede. A normal group size is 24.

Getting started
The group meets at 7 p.m. at the Eiffel Tower’s south leg by the big yellow sign. If there are too many, Fat Tire just breaks it up into two groups.

When we met, our group was up to 36. The family of ten and five others made up the second group and left long enough after us that we did not bunch up; they caught the 10:30 p.m. cruise.

“Vanessa and Nate” who pulled up the rear were In fact part of the tour group. They were asked to remain as the last ones and wore the same orange vest as Stacy

What to bring
Bring food in your back pack. Wine during the boat ride is included in your initial ticket price  and is carried by group volunteers. The Fat Tire Bike Tour is the only group allowed to bring liquor on board. You may bring your own beer and wine.
HINT: Someone asked me about where to buy alcohol on Sundays.

Wherever you stay in Paris, you will see small shops open on Sundays with vegetables and fruits out front. Go inside. These shops are similar to an old mom and pop operation where you can get all of your basics when regular grocery stores are closed, including beer, wine and water.

Otherwise, Fat Tire has water available for purchase at their headquarters.

Rain gear
In case the weather is threatening rain, it is not necessary to run out and buy rain gear. Fat Tire sells ponchos for one euro. If you do not use it by the end of the evening, they will buy it back from you. We never used ours, but they are so compact, we are keeping them for a future emergency.

In the past four years, only one tour has been delayed due to the weather. They waited it out and then took off! As they say at Fat Tire, “In Paris the weather always passes!”

Who is Stacy?
Stacy came to Paris for the first time in 2005 to run the Paris Marathon, fell in love with the city and decided if she found the means she would stay; et voilà! our guide for the evening.

Stacy did a great job, chatted with just about everyone, and made the group feel good! By the end of the evening when we had returned to the office the bulk of the gang was regrouping inside to head over to the Canadian bar together.

We decided to limp home in a cab, to nurse my rarely used muscles behind my knee!  and go to bed like some 22-years-ago college graduate!

Have some more, you are too quiet! Oops! As we quietly put down our bikes stands by hand so as not to wake the neighbors at midnight; the group prepared to close the doors of the office, let a big whoop! and head to the Canadian bar!

Mingling with the locals….

Nate was the rear guard

Each bike has a name

View from a bridge over the Seine

Stacy knows how to use every digital camera known to man!

The tires stay in good shape this way…..

Only the facts, madam!

Silhouettes at the Louvre

View from the bateau

Is anyone thirsty? Who wants to make a toast?

Quiet moment along the Seine….